The third in our series of reports for practitioners has now been published in both English and Arabic.

Drawing on decades of research on paramilitary prisoners in Northern Ireland, Professor Kieran McEvoy seeks to draw lessons that are of relevance to Palestinian prisoners.

Having set the background to the Northern Ireland conflict he addresses in turn British state strategies for managing political prisoners and the manner in which successive waves of prisoners reacted to and resisted those strategies.

His analysis reveals that the evolution of prison management reflects key ideological, political and practical shifts on the part of the state.

Likewise, the various strategies adopted by prisoners offer important insights into the political and strategic thinking of their respective organisations.

For republicans in particular, the overlapping strategies of communal organisation, escapes, violence, and manipulation of law were tied up with their central assertion that they were politically motivated actors in a highly political struggle. 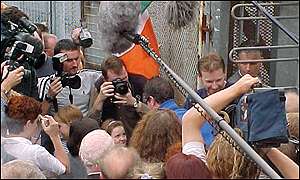 Professor McEvoy concludes that the early release of ‘qualifying’ prisoners under the terms of the Good Friday Agreement represented an acknowledgement on the part of the state that this was a political conflict requiring a political solution, not least with regard to political prisoners.

This Queen’s University Belfast / Ulster University project explores the role of lawyers in transitions from violence or authoritarianism. Drawing on six key case studies we will establish a comparative and thematic framework for lawyering at key historic stages in conflicted and transitional societies.

Give us a call on:

Send an email to:

Write to us at: